Why the Refugees from Burma arrived in San Diego

During 2007, Karen refugees began arriving in San Diego from refugee camps in Thailand, brought through United Nations and U.S. Government sponsorship. Smaller numbers of Chin and Karenni have subsequently arrived. Their country of origin is variously referred to as Burma and Myanmar. The name Myanmar was the new name chosen by the military government, but the refugees prefer Burma. Burma is a land of mystery to many readers, apart from reports of cyclones and atrocities by the military government against monks and other protesters. 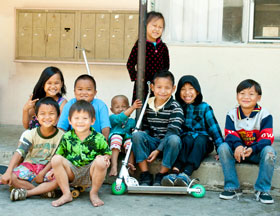 The Karen are a minority group of more than 3 million people and have fought for independent recognition as an ethnic group within Burma. They have been under attack in their homeland valleys and jungle villages by Burmese government forces since shortly after World War II. As a result of this dispute, many Karen fled through the hills and jungles of northeast Burma and across the border into Thailand. (See website for Karen Human Rights Group at ​khrg.org​). Active missionary work by the American Baptist Church in the 19th Century has assured some 70% are Christian.

The Chin population is about one and a half million and originally entered Burma from China. They also have insisted on an independent cultural and political status within Burma and have suffered repression from Burmese military forces. (See website for Chin Human Rights Organization atchro.org​). Over 70% of the Chin population were converted to Christianity in the early19th Century and the remainder are animist or Buddhist. 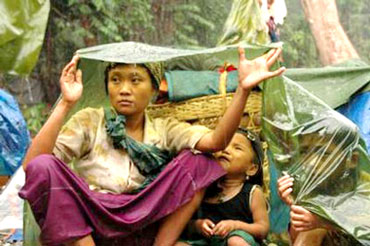 Virtually all the Karen refugees arriving in San Diego have lived for years in refugee camps in Thailand and were prevented from working or living in Thailand proper. All the young Karen we have received were born in these camps. They do not speak English and there are few Karen speakers in the San Diego population. The Network has struggled to find workers for this field and now has two part-time workers, one of whom speaks Karen. Both speak English.

The Network’s tutorial program has attracted 60 young people and has a waiting list of equal numbers. The most recently arrived Chin refugees have arrived in San Diego by way of Malaysia. They drove down the length of Burma from their northern homelands to Yangon (Rangoon) and made their way walking up the steep and forested mountains of Eastern Burma into Thailand. From there they moved south to Malaysia and lived around the edges of Kuala Lumpur.

A summarized history may help those new to Karen refugees to understand their journey through the last 60 years. The upper Irrawaddy Valley and mountain tribes, particularly the Karen, Chin and Kachin minority groups played a significant role in harassing Japanese columns as they sought to enter India in the northwest or to establish the Burma Road as a rear door entry to their main adversary, China. The Burma Road was constructed to take military supplies into southern China. The Karen and other minority groups had been well trained by the former Britishrulers of Burma to help keep law and order in the mountains and valleys of northeast and northwest Burma. Under British military leadership, the Karen soldiers played a major role in harassing the movement of Japanese supplies to the construction sites of the Burma Road and, through guerilla activities, blew gaps in the completed railroad. Toward the end of the war General Stillwell and the Flying Tigers and other U.S. military forces joined this battle and the Karens fought under their command also.

In the northwest mountains and forests the Chin resisted Japanese efforts to move into India through Manipur State.The end of World War II saw the Burmese demand independence from their former British rulers and a strong cadre of Japanese-trained (during the war in Tokyo) political leaders took power. The Burmese army was sent to bring all regions of Burma under control of the newly-declared state of Myanmar. Details will not fit here, but the reader may be interested in the bibliography provided at the end of this section. For 60 years the battles have been fought to suppress minority groups that sought some sort of independent status within a federated Burma. This concept was totally rejected by the original Burmese Government and by the military who swept into total political power in 1962. The refugees we accept today come to the U.S.A. as the result of these long years of warfare.The present situation offers little hope of change and a quote from “The River of Lost Footsteps” by Thant Myint-U sums this up:

The Burmese civil war is the longest-running armed conflict in the world... The Second World War never really stopped (p.258)... The Communists had been killing for a worker’s paradise in the little pagoda towns of middle Burma... Now ethnic nationalists, both Burmese and Karen,were itching for their own war (p.262) For a country as diverse as Burma, with so many different peoples, languages, and cultures, only a free and liberal society can provide a lasting stability and lead to real prosperity. -- - Today the military machine is all there is,with only the shadow of other institutions remaining. So what of the future? There are no easy options, no quick fixes, no grand strategies that will create democracy in Burma overnight, or even over several years.

Equally pessimistic are the editors for twelve academic papers that examined Myanmar’s political and international issues. The papers were presented at the Seventh Myanmar/Burma Update Conference held in Singapore in July 2006. The outcomes look like failing to open the way towards a new era of politics for Myanmar, which might begin to resolve the tensions and inequities that precipitated the past five decades of internal conflicts,including the uprisings in 1988. (Vicky Bowman. “The Political Situation in Myanmar” p.16) inSkidmore, Monique and Wilson, Trevor (eds). Myanmar; the State,Community and the Environment. The ANU Press & Asia PacificPress, Canberra, 2007.